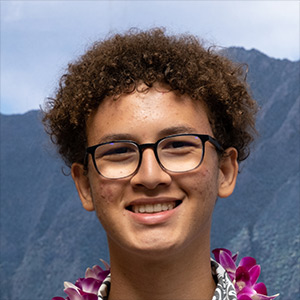 Pono is 16 years old, and is in his 12th year playing ‘Ukulele and singing Hawaiian Music, as he started with Ke Kula Mele Hawai‘i when he was 4 years old. In his previous school, his fellow students called him the "‘Ukulele Wizard." Pono's 5th grade music class teacher described Pono as a very talented musician, a leader in the class, and always taking the time to help other students who are trying to learn to play ‘Ukulele. Pono does the same for the new kids in Ke Kula Mele Hawai‘i who are learning ‘Ukulele. He has also been learning the Hawaiian Language from a young age, and his Hawaiian language skills continue to improve every day. At age 11, Pono decided that he wanted to learn how to play the steel guitar, and at one time was the youngest steel guitar player in Hawai‘i, and as such the youngest in the world.

In addition to Hawaiian Music and language, Pono is also a football fan and loves to go to UH football games. He is the quarterback on his Flag Football team, and as in his ‘Ukulele Class at School, Pono is also a leader on his team. His other interest include riding dirt bike, going to the beach, flying his drone, and of course his video games.

Pono attends Kamehameha School and is in the 9th grade. He wants to learn more about Hawaiian culture, music, dance & language. He also wants to play football for Kamehameha, and eventually go to the University of Hawai‘i and play football for Hawai‘i in front of his family and friends. One of his dreams is to be a professional musician here in Hawai‘i, so that he can help pass on the Hawaiian culture to the next generation of Hawaiian children.